I don't know about where you live, but here in New Jersey it is H-O-T outside, and that is really messing up my menu plan.  I mean, who wants soup when it's 80 degrees out?  You, that's who!  (I didn't expect it to be so hot today and now this post is semi-irrelevant.  It'd be great if you'd be so kind as to play along.)

For many people soup is strictly a winter food, but my stomach doesn't seem to know how to work a calendar, so soup is an anytime meal for me.  Don't get me wrong, I'm not usually one for eating balsamic beef chili in July, but there are certain soups that are perfect for those slightly chilly early spring evenings--and I'm not just talking about gazpacho.  Actually, I'll probably never talk about gazpacho because I don't understand the phenomenon that is "cold soup", but I digress.

At some point last spring, I found myself craving some sort of soup.  Not just a "Gee, I ought to make soup next week" craving, but a "SOUP. NOW. EAT." craving.  (You don't get those?)  Since I tend to appease my cravings for healthier foods, I figured I'd get creative and make a soup out of what I had on hand: frozen spinach, canned tomatoes, chicken stock, and some frozen cheese tortellini.  The idea was good, but the poor quality of the ingredients was painfully obvious.  I ate my soup, however meh it may have been, and filed the idea away for future use.

I reworked the recipe several times over the year that followed, never quite happy with the finished product.  Despite lingering dissatisfaction, I was convinced that I was on to something, so I never once thought of altering the original ingredients.  I was begrudgingly about to admit defeat and call the soup a flop when I found myself in the grocery store, face to face with my recipe's savior.  "Ciao, bella!" she breathed as she kissed me on the cheeks in that way that only Europeans can get away with. 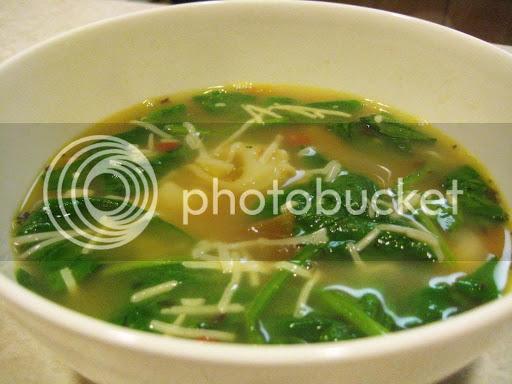 In a large saute pan over medium-high heat, cook the pancetta until crispy and lightly browned.  Be careful to stand back to avoid being burned by grease!  Once cooked, remove the pan from the heat and do your best to reserve any grease as you remove the pancetta to a plate lined with paper towels.  If less than 1 tablespoon of grease remains, add 1-2 teaspoons of olive oil.

Place the greased saute pan over medium heat and allow the grease/oil to warm until it shimmers.  If the oil smokes, reduce the heat!  Once the pan is hot, add the garlic and allow it to cook, stirring frequently, until the garlic is fragrant but not browned, about 2 minutes.

Reduce the heat to medium-low and add the spinach.  Carefully toss the spinach to coat it with the oil and mix in the garlic.  Season with salt and pepper.  Continue to cook, stirring often, until the spinach is slightly wilted, 2-3 minutes.  Remove the pan from the heat, stir in the garlic, and cover.

Add one tablespoon of olive oil to a large stock pot.  Place the stock pot over medium-high heat and allow the oil to warm until it shimmers, but is not smoking.  (Reduce the heat as needed.)  Add the seeded, chopped tomatoes and cook, stirring frequently, until the tomatoes begin to break down, 1-2 minutes.

Once the broth is boiling, add the tortellini, then the spinach mixture.  Let the soup simmer for 1-2 minutes to cook the tortellini (check your package for the recommended time), then remove from heat.

Ladle the soup into bowls and sprinkle with shredded Parmesan.

Labels: about me, homemaking, recipes, spring